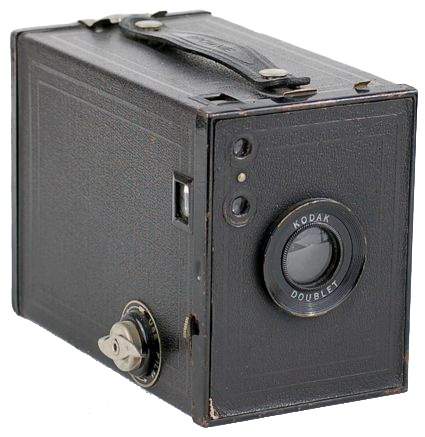 MANUFACTURER: Eastman Kodak Company
PLACE MANUFACTURED: US, NY, Rochester
INTRODUCTION DATE: Nov. 1933
PRODUCTION DATES: Nov. 1933-Feb. 1934
FILM TYPE: 120 rollfilm IMAGE SIZE:6x9cm 2¼ x 3¼ inch.
STANDARD LENSES/SHUTTERS: Kodak Doublet
The No.2 camera is a basic box camera using 120 film with a Kodak Doublet lens. As a mostly export-only model these are less common than other Brownie.
This model was probably the last 120-film Brownie box camera to be produced by Kodak in the USA.
At the time Kodak introduced the six-20 Brownie cameras in the USA, they were unable to supply 620 film worldwide, therefore they produced the Brownie Special cameras for export. A few where sold in the USA, as they were included in a special Christmas package offered to dealers in 1933. A few more (2000) were used for the Chicago World’s Fair 1933 camera.
The remainder where for export to Australia as the primary marked for these cameras.