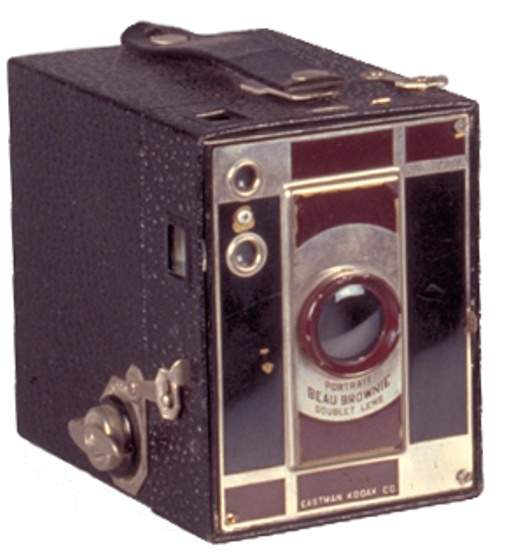 Portrait Beau Brownie (proto) collection George Eastman House, Rochester, NY
MANUFACTURER: Eastman Kodak Company
PLACE MANUFACTURED: US, NY, Rochester
INTRODUCTION DATE: Oct. 1930
PRODUCTION DATES: prototype
FILM TYPE: 120 rollfilm IMAGE SIZE: 2¼ x 3¼ inch.
STANDARD LENSES/SHUTTERS: doublet lens rotary
shutter and portrait lens
Metal body, styled by Walter Dorwin Teague with
two-tone enameled geometric Art Deco design front panel.
The Beau Brownies were manufactured in the U.S. in the period 1930-1933. This was a period during which Kodak Ltd. was making the No.2 Portrait Brownie, the First design from the new Kodak camera factory at Harrow, and manufacturers such as Coronet and Ensign in Britain and others on the continent where also making “portrait” cameras. But in America cameras with build-in portrait lenses just didn’t appear in that period. So apparently Kodak in Rochester was taking a look at what such a camera would be like and deciding whether or not to put it into production, they never did. 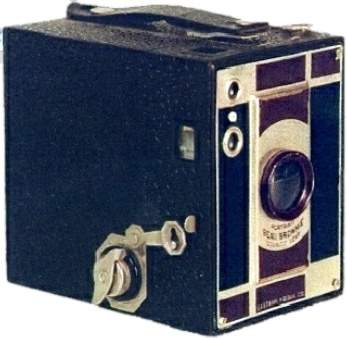