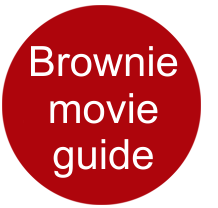 Kodak dealer catalogue 1958
This camera is just what the amateur has been waiting for a really simple, inexpensive 8mm. movie camera which is easy to use and which takes top quality pictures in full rich colour or black and white. All the user has to do is load, set the lens aperture according to the built in guide, and press the exposure lever.
A ‘Lumenized’ f/2-7 fixed-focus lens, easy sprocketless loading, builtin exposure guide, and a continuous running device which enables ‘self-movies’ to be taken, are a few of the features that make the ‘Brownie’ Movie Camera Model II such an attractive proposition.

Lens and Mount:
The fast ‘Lumenized’ 13mm. ‘Cine-Ektanon’ lens f/2-7 is perfectly adequate for the great majority of subjects. It is fixedfocus, with sufficiënt depth of field, even at full aperture, to meet all average picture-making needs. The mount takes ‘Kodak’ or ‘Kodisk’ Lens Attachments size 250.

Aperture Control:
Finger tip click-stop control is provided in the form of a plastic disc with a serrated edge, marked with clearly defined figures denoting lens openings. To prevent accidental exposures, the exposure control disc has a ‘lock’ position at which the lens is obscured and the exposure lever is locked.

Viewfinder:
The collapsible viewfinder is of the open frame type. A flick of the finger erects it to the aiming position. The front frame is marked for parallax correction at 2 feet and 4 feet.

Exposure Guide:
There is a slot in the camera side to take the exposure guide card packed with each roll of ‘Cine-Kodak’ film.

Sprocketless Loading:
The ‘Brownie’ Movie Camera Model II loads with 25 feet rolls of economical ‘double-run’ 8mm. ‘Cine-Kodak’ black-and-white or ‘Kodachrome’ film. After processing (at no extra cost) this gives fifty feet of film for projection. The film is simply slipped into the gate and on to the takeup reel; there is no threading as there are no teeth or sprockets to engage.
Should a spool be incorrectly placed on its spindle, the cover will not slip into position.

Motor:
Wound by a large butterfly-type winder which folds flat against the side panel. The spring-driven motor runs smoothly and quietly and when fully wound has ample reserve for longer than average shots.

Exposure Release:
A flat exposure lever protrudes from the front of the camera, where the index finger can conveniently operate it. For normal running the lever is pressed down; the motor stops immediately pressure is re- leased. To lock the lever for longer sequences, or if the operator wishes to include himself in the picture, the lever is pushed in and up.

Footage Indicator:
The indicator is directly geared to the motor and shows at a glance how much film remains to be exposed.

Tripod Socket:
Though the ‘Brownie’ Movie Camera Model II is essentially designed to be hand held for normal operation, a £ in. Whitworth thread bush in the base allows it to be mounted on any Standard tripod for extra steady shooting.

Construction:
The ‘Brownie’ Movie Camera Model II is sturdily built of aluminium and beautifully designed to meet the taste of the most critical cine- enthusiast. All metal parts are chrome plated.

Carrying Case:
A strong ‘ever-ready’ field case is available as an accessory. 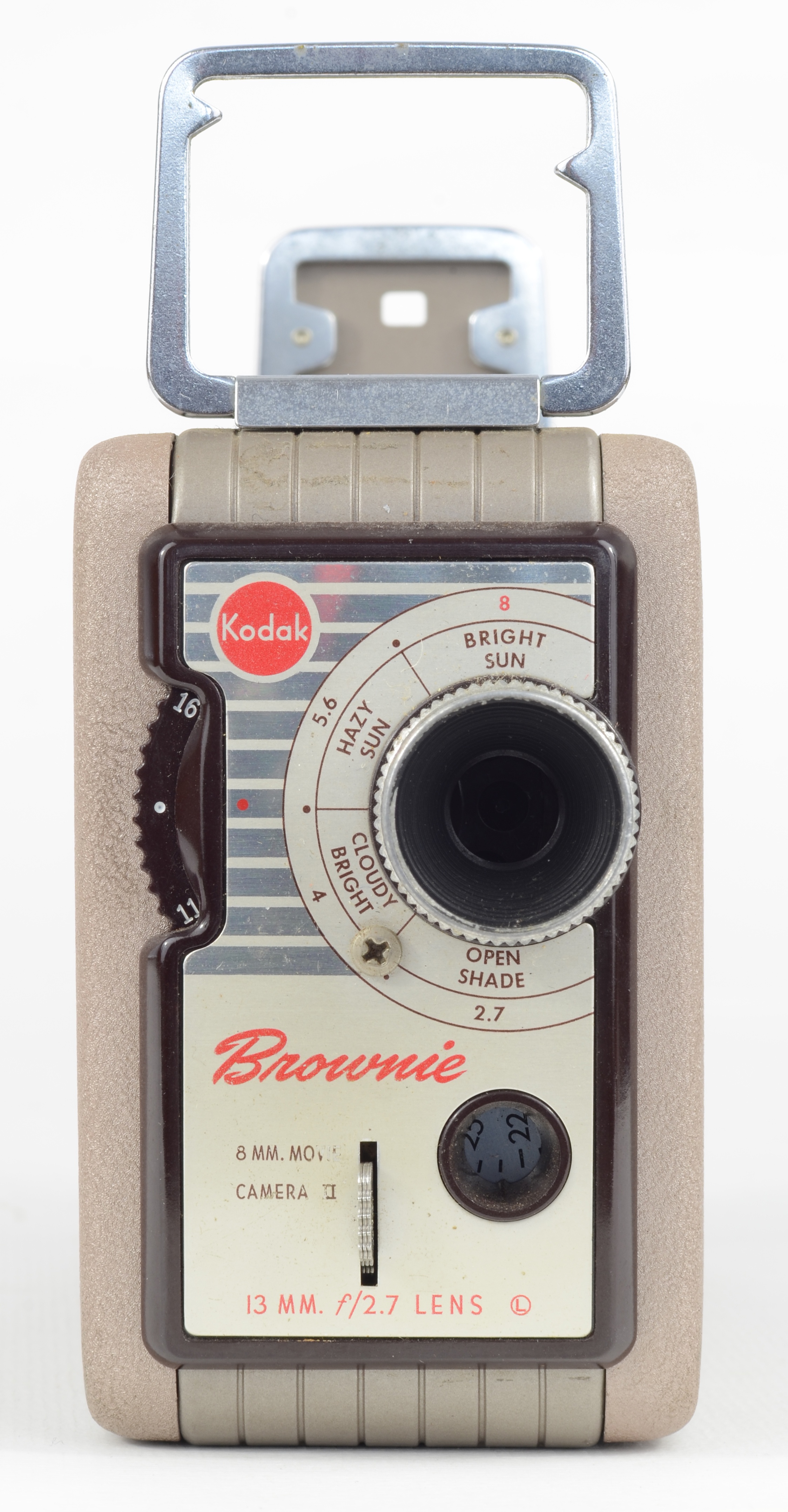 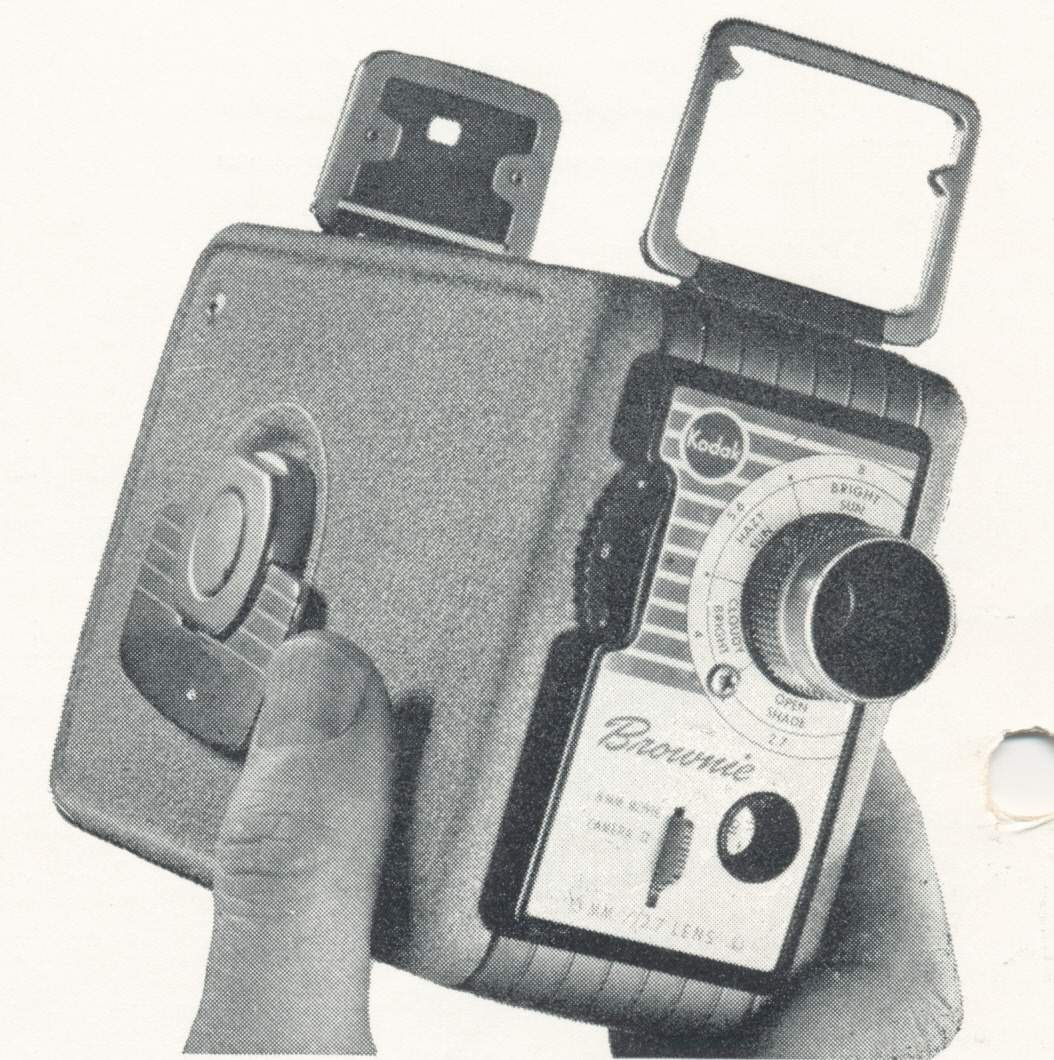 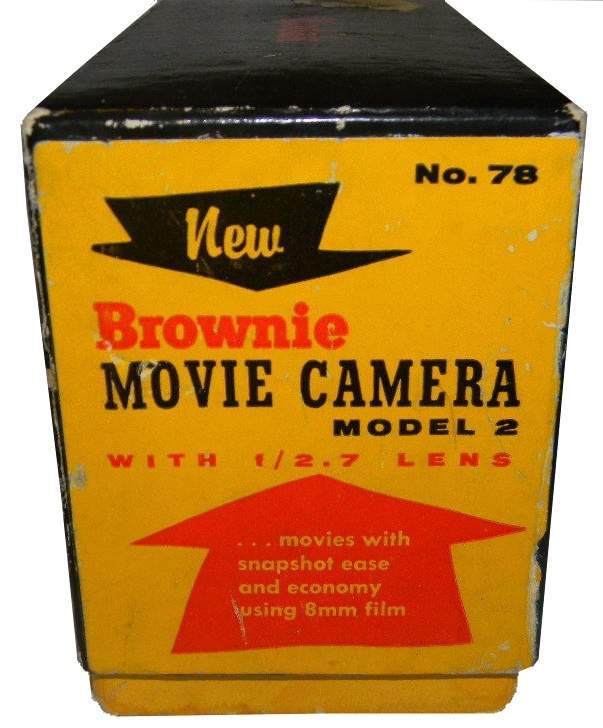